Making Sense of the 2018 Civic Census 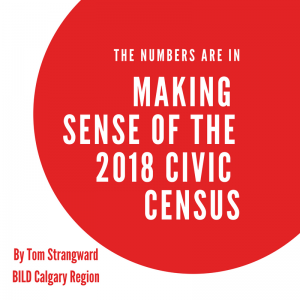 At the end of July, the City of Calgary released their 2018 Civic Census results and the underlying figures serve as not only a barometer for how the city is growing after a damaging recession but how the industry is responding in order to accommodate these residents.

On the positive front, the out-migration of 6,500 people in 2016 seems to have been handsomely offset during a period of recovery, with the most recent census marking a population growth of over 21,000 people to over 1.2 million people and a net migration of 11,588. The growth percentage of 1.7 percent is being called “healthy” by Mayor Naheed Nenshi, who cites the figure allows city planners to keep pace with expanding infrastructure needs.

Another positive in the eyes of the city is the Beltline District leading the way when it comes to communities which welcomed the most new residents, as the area swelled by 1,668 people to a total of nearly 25,000. This means older neighbourhoods are involved in growth alongside the newer suburbs, which is more in line with the city’s idealized, balanced growth in old and new communities.

The growth is also a positive step forward for the home industry, as outer communities continue to prove themselves a desired destination. Nolan Hill, Sage Hill and SkyView Ranch all recorded population boosts of over eleven hundred people. Saddle Ridge was behind only the Beltline in new residents, welcoming 1,656 residents, while Mahogany, Legacy and Evanston all grew by over thirteen hundred residents.

Additionally, the latest report from the Canada Mortgage and Housing Corporation (CMHC) identifies Calgary as a buyer’s market for prospective homeowners. The census notes housing units continue to be on the rise in Calgary, increasing by 8,999 to 515,391. The vacancy rate of housing units declined by almost a full percentage point, dropping to 3.86 percent, while the biggest glut in the market was identified as apartments which are 6.3 percent vacant though most of these are also rental properties. This is due to focused construction during a friendlier economic climate during the earlier part of the decade before the recession spike.

Coupled with City Council’s decision to move forward with 14 additional communities on Monday last week, the home building and development industry appear to be part of the ascent of Calgary’s ongoing economic recovery.

“Calgary City Council recognized the continued growth curve for the City, as well as the economic stimulus that the building industry provides, and approved 14 new communities that will provide future housing supply and enhanced choice and affordability for consumers,” says BILD CEO Guy Huntingford.

“Council must be applauded for their vision and commitment to building a great city.”