This article was first published on CREB Now’s website on January 19, 2018.

Guy Huntingford knows the value of providing people with useful and interesting information.

After all, the CEO of BILD Calgary Region was once in the newspaper business, as a publisher at both the Calgary Herald and the Calgary Sun.

That background gave him the spark needed to put together the Smarter Growth Initiative, a BILD-affiliated entity whose tagline is “fostering conversation about urban development,” nearly four years ago.

“We decided we needed to have a better way to get our message out, rather than through the organization, so we created this entity called the Smarter Growth Initiative,” said Huntingford, adding that BILD itself is an advocacy group that represents the homebuilding and development industry in Calgary and surrounding areas.

“The Smarter Growth Initiative is purely an educational tool and there’s all sorts of information and data out there about our industry and it’s got a lot of really good play because it doesn’t editorialize at all. It doesn’t lobby or advocate. It just simply states facts about things that are going on in the industry,” said Huntingford. 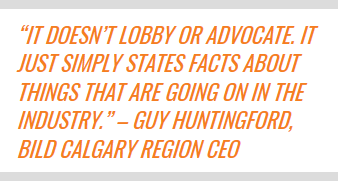 looked at through a lens that was not helpful to collaboration with the municipalities. In other words, there was this sort of conventional wisdom that if industry said something, it was totally biased. We wanted to create a way for us to get information out to the public, politicians, stakeholders, the whole gamut of people, and say, ‘there’s information you need to know before you make a decision as to whether industry is being self-serving or whether you agree with what’s being said. You just need to know the facts.’ ”

A cornerstone of what the initiative provides to the public is in-depth research, often conducted via surveys.

As a real estate reporter and columnist, I spend much of my time seeking out the latest information, statistics, insights and news about an industry the public just loves hearing about. As part of that search, I checked out the Smarter Growth Initiative and discovered a wealth of information.

Here are just a few of the things I learned:

To find out more about the Smarter Growth Initiative, visit smartergrowth.ca.